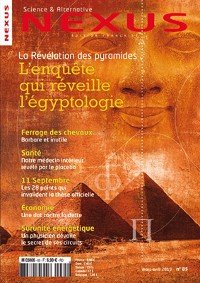 The Consensus Panel, a site devoted to providing the world with a clear statement of the best evidence opposing the official narrative about 9/11, has been publicized in Europe. A French magazine, Nexus, which sells on news kiosks throughout France, has featured the 9/11 Consensus Panel in 12 pages of its upscale glossy magazine.

The English translation of the title is “9/11: Case Closed?” Each of the 28 Consensus Points is summarized in turn, there is a good selection of photographs, and a page is devoted to 33 Consensus Panel footnotes backing up the summaries. The article, by Kim-Anh Lim, appeared in the March-April issue of Nexus, which costs 6.90 Euros and is not published on the Internet. However, a photograph of the cover shows the heading “11 Septembre: Les 28 points invalident la these officielle.” There is a summary in French of the article online at the Nexus website.

Nexus is a large company that produces magazines in 13 countries around the world. Here is a description from their corporate web page:

“NEXUS is a bi-monthly alternative news magazine covering health breakthroughs, future science and technology, suppressed news, free energy, religious revisionism, conspiracy, the environment, history and ancient mysteries, the mind, UFOs, paranormal and the unexplained. NEXUS Magazine is not affiliated with any political, religious or spiritual groups or organizations whatsoever, and has been published since 1986. The magazine is on sale in shops across Australia, New Zealand, UK, France, Italy, Holland, Greece, Poland, Croatia, Japan, Romania, Serbia and Russia.”